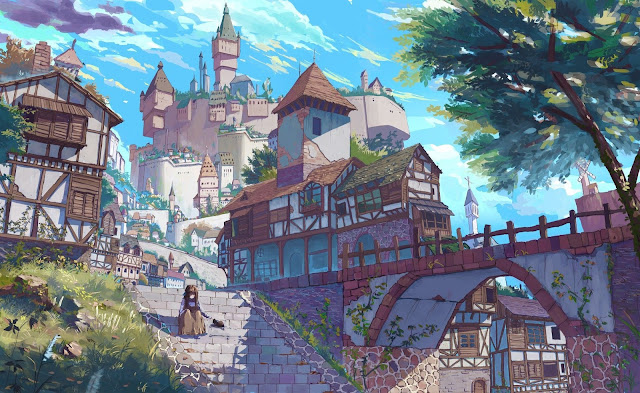 I couldn't find the source of this image. It's pretty dope and a huge inspiration for my city campaign So, to bridge the time between the next dungeon post, I decided to create a post about my setting, because why not. Erika did it , and it was a nice post. So, Jojiro from Dungeon Anthology created a post in which he outlines 20 questions that should help flesh out your setting. I already did the one Jeff Rients created on a district in the city that takes place in my campaign. I worldbuild my setting generally from bottom to top, because I sometimes tend to focus on things that are not directly gameable and lose myself in work that steals time from prepwork. As a brief introduction, my setting is focussed on the city of Ainstrom, your typical fantasy megacity. I run a pointcrawl in the city, the players will most likely not see any wilderness for my campaign. Disclaimer, the setting is pretty much just a generic fantasy kitchensink, but those also can be fun .
Kommentar posten
Mehr anzeigen 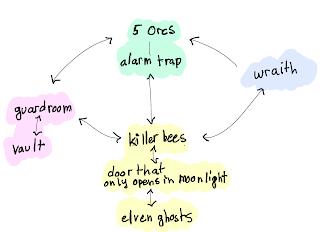 Hey my blog has the same birthday as occultronics and magictrash ! To celebrate the birth of its siblings, I decided to, you guessed it, create more minidungeons! This time, themed to their first posts. Let's start with some elven stuff . Andune Outpost In a forest, there is an old abandoned elven outpost. People believe that a silmaril is hidden there somewhere. This is almost true. Three elven families met here on neutral grounds and quarreled over which family has the right to keep the silmaril. The disagreement escalated and the elves started to kill each other. A single unnamed halfling that somehow got involved with the meeting escaped with the silmaril. Graph: rumors: there are dark forces interested in finding the silmaril people say that orcs were spotted in that forest the outpost served as neutral meeting ground before its fall. apparently some elven families kept their riches in that outpost. sometimes people hear frightening shouts
Kommentar posten
Mehr anzeigen

note: English is not my native language so this might be a little difficult read at times, I apologize. So last night I was sleepless in bed and thinking about how nice Chicagowiz three hexes as a campaign starter are, and because I currently create some dungeons for my playgroup and had great fun drawing some maps I thought it might be fun to create dungeons that way. I draw parallels between creating three hexes as a campaign starter to the Alexandrians node based approach . Every hex represents a node connected by edges to other nodes. In the three hex example there is always a homebase on which the players start out, which is most of the time directly connected to the three hexes. This falls nicely into the node based interpretation of the three clues rule the Alexandrian described on his blog. So how to design dungeons this way? First of all, let me do a small little definition. Every dungeoncrawl, hexcrawl or idk pubcrawl is a pointcrawl, if you abstract all defining
Kommentar posten
Mehr anzeigen